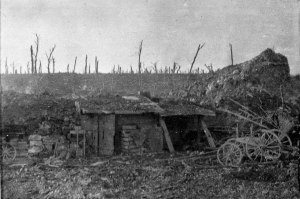 Born in 1894 in Thurstonfield, Cumberland John was the son of John and Mary Atkinson of 34 Washington Street, Hull. A Ship’s Cook before the war he enlisted in March 1915 joining the 10th Battalion East Yorkshire Regiment, ‘The Commercials’, 1st Hull Pals.

After their posting to Egypt over the winter of 1915-16 the Pals arrived at Marseilles in early March and were sent north to the trenches of the Western Front. For all the privations and discomforts of the desert, what awaited them was far worse. After a spell of good fortune when the battalion earned the nickname ‘The Lucky Tenth’ for coming through a few bombardments completely unscathed, their fortunes changed in the small hours of 4th June 1916 when a pinpoint German barrage completely flattened the front line and took the lives of 20 men in just over an hour. John was fatally wounded here and died in 2nd Stationary Hospital on the 7th. He is buried in Abbeville Communal Cemetery; he was 22 years old.

One of the lucky ones described their escape that night:

“I believe my rescue was completed by Joe Allen, who got my head free, which was all that could then be done….By this time the front of the trench was gone altogether and I was out in the open, pinioned from the shoulders downwards and unable to move until the shelling ceased, when someone freed my arms and gave me an entrenching tool to dig the rest of myself out. I suppose I must have been somewhat lightheaded, for I remember singing and telling my leg I could not possibly go without it, until a young newly-joined officer, who was doing heroic work digging others out, bid me shut up for fear the Germans heard me and came across”